Santa sighted a deep breath as worry and uncertainty gave way, leaving a feeling of relieve and accomplishment. The year was one of the worst he’d seen so far. A large part of his helpers was moving from the North Pole to Antarctica to satisfy their ambient temperature preferences. There would be many telecommuting Elves this year, and each helper enjoyed additional autonomy. Tying everything together was a challenge. But he had succeeded: the wishes processing program was finished, and the elves would be helping Santa from the comfort of their new homes.

The part of the wishes system that Santa had been working on was focused on classic toys: wooden bricks, dolls, and train sets.

The system also kept track of basic data about the children:

Children and toys were tied together in a wish.

It was most elegant. The problem for Santa was that the Elves, being independent and autonomous workers, needed to access and process the data in very custom ways. Unfortunately for him, very few Elves had a Haskell build environment installed, so he had to distribute the binary. Writing a completely custom processing language seemed like an enormous rabbit hole.

Fortunately, Santa had a better idea: Lua, an embeddable scripting language. He had been using it for some projects1 and also made use of it in pandoc, which he used to answering his mails. Santa would just need to expose the relevant parts of the Haskell system, so the Elves could access and script it as their hearts desired. He looked for a library, found HsLua, and got to work.

Lua has a simple, yet powerful, stack-based API. The first step towards exposing Haskell data was to push them to the Lua stack. Keeping things simple, Santa chose strings to represent toys:

Lua offers only a single construct to structure data: tables. So that’s what Child and Wish were represented with.

Santa’s goal for now was to allow his Elves to filter the list of wishes so each finds the ones relevant to them. For example, if an Elf only cares about wishes for train sets from children who were nice, then they should be able to use a script to filter those wishes out.

The script returns a (lambda) function that serves as a predicate for wishes. The function can be thought of having the type Wish -> IO Bool. Santa needed to turn the Lua lambda function into an actual Haskell function runPredicate :: Wish -> Lua Bool. If Santa assumes that the lambda function is at the top of the Lua stack, then he can push a Wish value to the Lua stack, call the function, and retrieve the result value from the stack.

What remained was loading the Elves’ script files. Santa did this with dofile of type FilePath -> Lua Status. The predicate then ends up on the top of the Lua stack, and can be called through runPredicate, e.g. to select a subset of wishes via filterM.

Santa tested his creation on a short list of wishes

by running runhaskell wish-selector filter.lua. To his uttermost satisfaction, the terminal echoed the right information back to him.

He reclined in his chair, shut down his device, and enjoyed a double chocolate chip cookies of which he felt very deserving now. 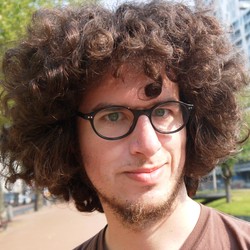 Albert is a molecular biologist turned mathematician turned software engineer. He is a passionate open source contributor with a special interest in open science and publishing workflows. He serves as a core developer for the universal document converter “pandoc”. After spending time in Lübeck, Hamburg, and Menlo Park, Albert now lives in Berlin with his wife and kids.